Galaxy Control Systems is a global leader in the access control industry. Galaxy hired me in late 2020 to lead the design effort on the project and work in collaboration with the Product and Engineering teams to bring Galaxy software offering to the next level. Our team needed to create software that was easy to use, extensible, and supported the latest technologies.

• Galaxy Systems was founded during the '80s, and since then, it generated technical debt.
‍
• We had to accommodate existing clients' needs while making a modern product capable of attracting new business.
‍
• A relatively small team for the development, consisting of 3 full-stack engineers and the project manager

We launched an alpha in late 2022 with selected partners and currently gathering real world feedback and data.

What is Galaxy Systems?

Galaxy Control Systems is a global leader in the access control industry. Control systems are the backbone of any organization that needs to manage its security and access. Galaxy has been a pioneer in developing advanced access control systems for over 30 years, and their products are used in a wide variety of applications worldwide.
‍
Since Galaxy makes its hardware in the United States, it allows its software and hardware teams to work closely together, so they can design and develop the products in a way to work seamlessly. It can also help to reduce the risk of compatibility issues. Some of Galaxy's hardware and digital offerings Galaxy hired me in late 2020 to lead the design effort on the project and work in collaboration with the Product and Engineering teams to bring Galaxy software offering to the next level. Our team needed to create software that was easy to use, extensible, and supported the latest technologies.

Initially, our team consisted of the PM and me, while the search for developers to bring on the team continued. Meanwhile, we started an onboarding process with the company, during which we familiarized ourselves with its history, structure, and existing software offerings.

As part of the onboarding process, our primary goal was to familiarize ourselves with Galaxy's current offerings and learn the business model they operated with, and of course, details of the existing software and its capabilities.
‍
Working closely with several departments within Galaxy Systems, we spent several months getting familiar with the system. Depending on the need, we contacted the Head of Cloud Offerings Lucas Lee, Lead Engineer Kevin Shank, Project Manager Taylor Caruthers, and Customer Support lead Cody Mobley. We also had access to the Galaxy executive decision-makers, including the company's president, Rick Caruthers.

By that time, company had several versions of software which have been in circulation for more than 20 years. Our team's main goal was to make new software modern and intuitive, while still maintaining the familiarity of the system for the existing customers. Another example of Galaxy Software

One of the essential aspects of learning about a client was getting to know our competition. For that reason, Galaxy has flown us to Dubai for an Infosec conference where Galaxy showcased its new offerings. Some of the other access control companies were there as well, so we could explore their products firsthand and chat with companies' representatives about the future of access control. During that trip, we also attended Galaxy's training course, which helped close some gaps in our software knowledge. Galaxy team building in the desert of UAE

After learning about the company, its needs, and its competitors, we moved to conduct customer research and schedule interviews with the current clients. Based on our progress back then, we had some hypotheses established during development that needed to be proven right or wrong. I created a plan for the interviews, learned about different customer businesses, and scheduled interview sessions.

One of the tools I discovered during the preparation for the research process was Dovetail. This tool helped me to analyze, synthesize, store, and share our customer research findings in a collaborative and easily searchable platform. For a solo designer on the team, it was a game changer in terms of what I could achieve during research. The Dovetail user interface allowed us to group and manage all of our research in a variety of ways. After the interview recording is uploaded, it automatically transcribes it, after which you can proceed to highlight and label different parts of the conversation. The result creates a map of your research data that is super easy to navigate and search. That helped the development process not only during the research stage but also during all consequent stages. For example, I could bring up direct customer feedback when we had a disagreement within the team. It's hard to argue with your own customers. Another example of vizualization

With the help of visual aids, it was much easier to communicate results to stakeholders. Many of the conversations were quite open and friendly, so customers shared many novel insights with the company. When developing subsequent UX and UI artifacts, we returned from time to time to our research participants, asking for additional feedback and providing updates. Our partners and research participants expressed having a feeling of participation and direct impact when they saw that their feedback was integrated into designs. That helped us grow trust and gain some allies along the way.

After several months of onboarding, research, and much discussion within the company, we moved into UX Planning. During that stage, we gathered everything we had learned in previous steps and translated it into UX artifacts. We created the information architecture of the whole Galaxy API and conducted several workshops in Miro for planning and prioritization, working closely with stakeholders and the executive branch of the company. We also created a set of user stories and user journeys based on our interviews with customers. We identified several user types that would use our system and discovered their focuses and prioritizations. With the research and interviews done, we moved to discuss all of the finding with stakeholders before moving to refining design based on the research findings. With current offering being vastly outdated, it was important to bring a modern look and feel to the software. We decided to focus on the desktop version initially and then decide which functions would make sense to enable on mobile. With too many features, we wanted to differentiate the use case of desktop and mobile Creating a design system for an enterprise company can be a daunting task due to the complexity of the organization. This view was made for our partners who installed Galaxy's systems and worked directly with customers to manage them. We created an easy, sortable view of companies, with search and filters, as well as the ability to favorite.

Each customer's item is also expendable, providing dealers with glanceable information and controls. The dealer can also open the detailed company view if they need more information or control elements. This is the main view where you have the biggest control and access to the system. Easily switch between different parts of the system - control Cardholders, Hardware, Access Control, I/O Groups, and more.

Working with forms and different user input formats was essential to this project. Everything in the system is either viewable or editable, sometimes showing vast amounts of information and having a particular flow user needs to complete before the input can be submitted.

I experimented with many ways of showing this. Still, I ultimately decided to make forms a more fluid and responsive layout element. That would come out quickly when you need it, not even abstracting other UI directly so that the user can regain context. I also decided to limit the width of forms and the maximum limit of form fields we could put on one row. 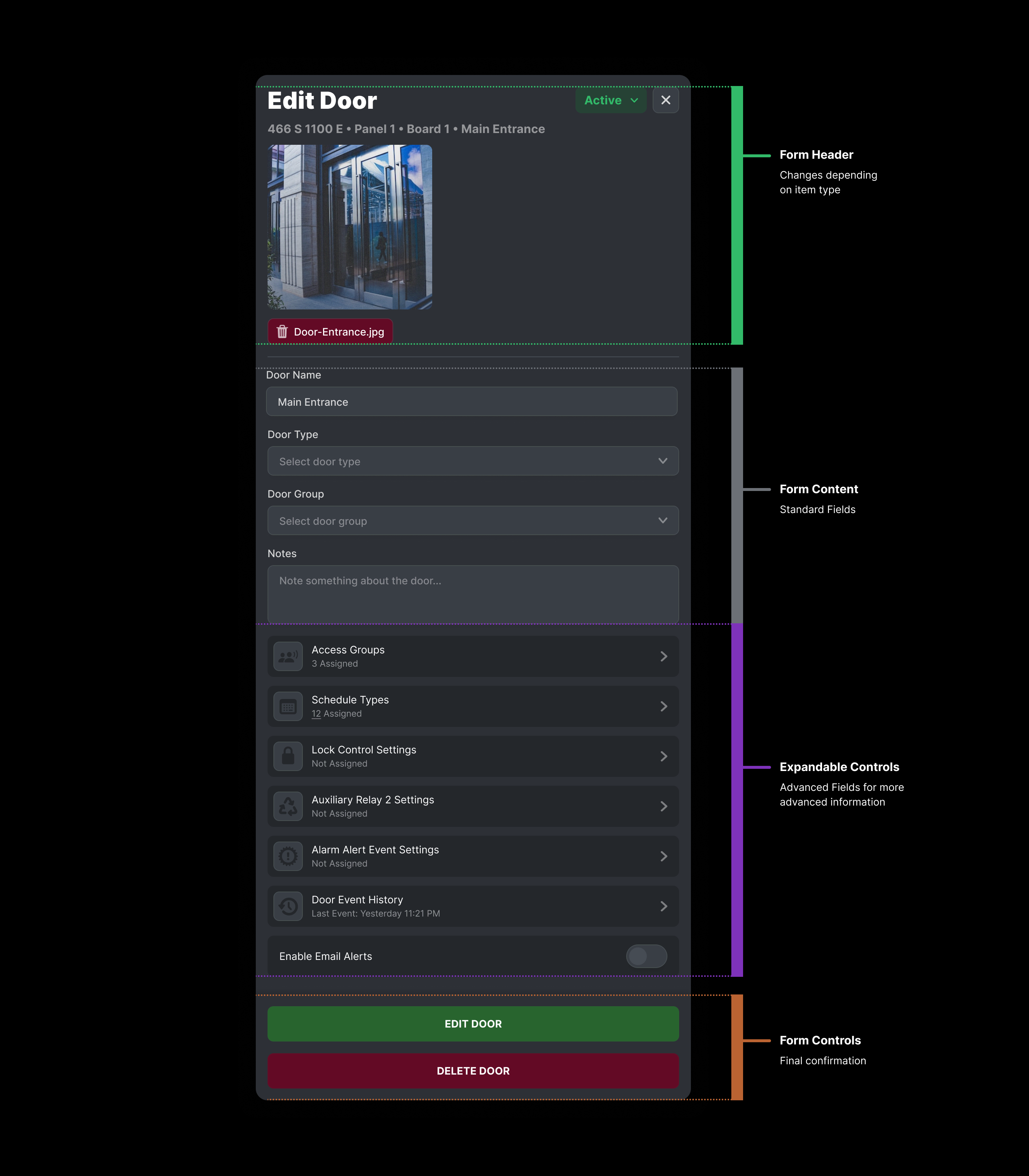 Add Access Group form. Check out prototypes below for demonstration

Creating a design system for an enterprise company can be a daunting task due to the complexity of the organization. This design system is a foundation for consistent design and shared components used throughout the company’s marketing, design and development processes.

It includes various components of different complexion, colors, and typography, as well as essential documentation of the system. 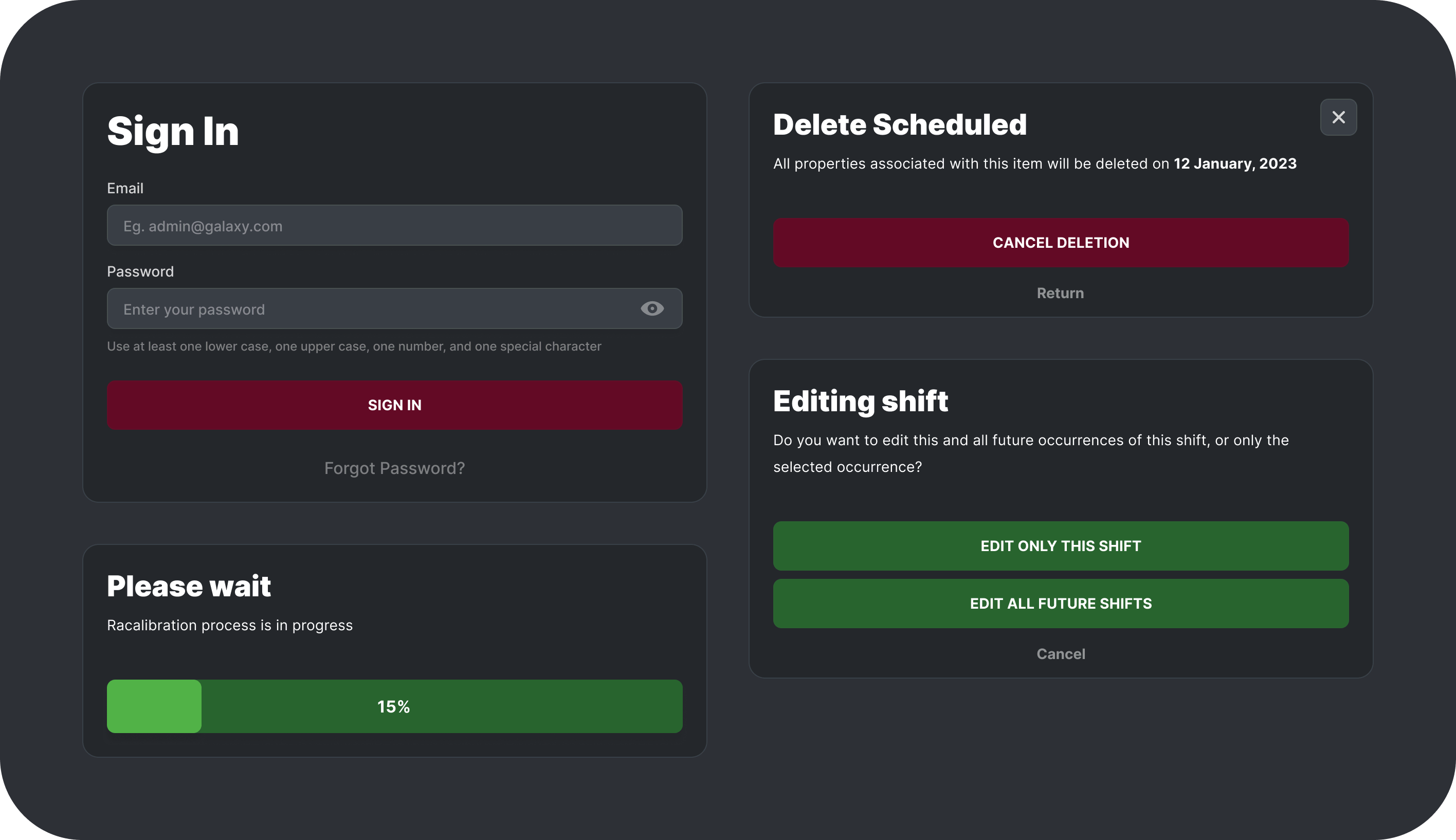 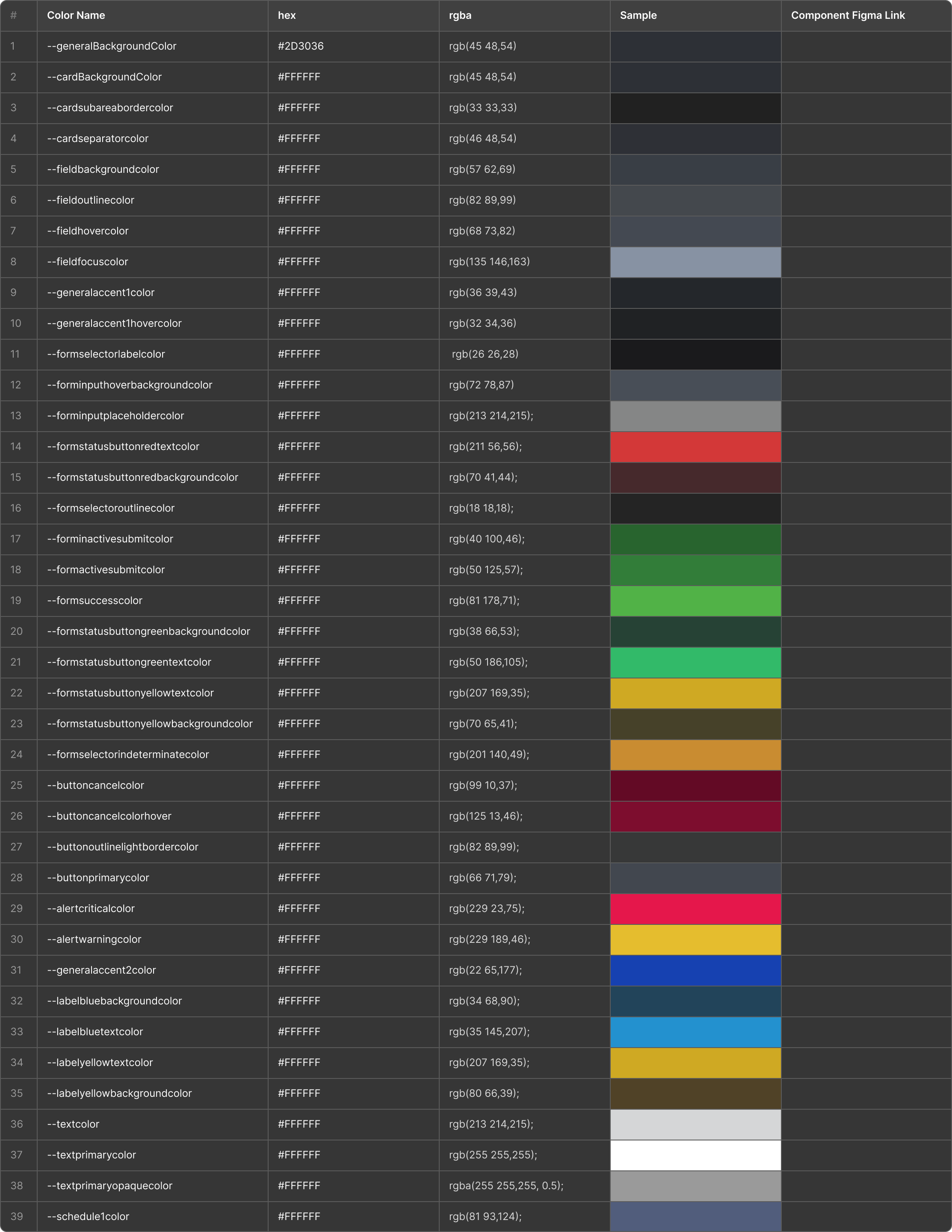 Here is an example of building a component using properties and auto-layout. After shooting all of the footage and 3D scanning the environment, we put everything in Unity game engine and started developing our VR application. It was such an important

Throughout the development process we maintained strong connections with our stakeholders. We had weekly meetings with Galaxy HQ to report on the progress, as well as occasional check ins with company's customers testing software. We were able to deploy an alpha version of the software to selected partners, where we continued to stress test and improve the product. Have a similar project in mind?